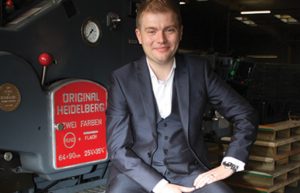 Trade finisher First 4 Print Finishing has invested more than £500,000 in its direct mail division and the completion of an upgrade to its stitching kit.

The latest installations join four existing mailing lines, two other CMCs and two Buhrs BB600s, which have been installed since last May, when the firm launched its direct mail division.

“That’s our fifth and sixth line inside 12 months. Direct mail is going fantastically well and it’s a two-way cross-sell for our core business. We’re now producing something in the region of 20m packs a month split between door drops and personalised jobs, and in many of those cases we’re also folding the live piece or stitching the brochure that goes in the pack,” said First 4 managing director David Nestor.

Around £1m of the firm’s £4m turnover is now generated by its direct mail operation and handle demand from existing and new clients, and enable future growth, First 4 has moved the operation into a dedicated DM facility.

The DM operation has created almost 30 jobs since its inception last May and the firm has leased a 1,400sqm facility two doors down from its main site on the outskirts of Blackburn to house the growing DM business. It moved the operation to the additional site two weeks ago.

The firm has also completed a retooling of its stitching facilities with a 2012 Heidelberg ST 400 stitching line. The machine, its fifth ST series, was installed in February.

“I think we’re probably now the largest user of ST technology in the country,” said Nestor.

“This one was on the back of strong demand for our core services, we’ve had immense demand for fold, stitch and trim for the majority of 2013 and that has continued this year.”

According to Nestor, next on the agenda will either be a substantial extension to its current main site or a move to larger, purpose-built facility.

“It seems mad that we’re already looking at a new site, but we’re jam packed. If we don’t extend where we are, I think we’ll start looking to buy a 6,500sqm facility towards the end of this year, with a view to moving in a couple of years.”

He also hinted that the firm was looking at adding new services later this year.

“I can’t pretend business has necessarily been easy – it’s been a learning curve – but we’ve evolved from a conventional trade finisher because we had to. But it has worked well and we want to make sure we don’t get complacent and will continue to try to do things a little differently, but without ever forgetting our core business,” said Nestor.