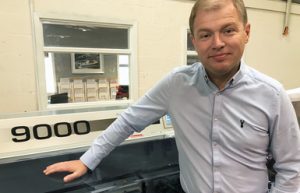 At the end of last year the First 4 Group spent around £250,000 on a pair of new Italian-made envelope enclosing lines, a CMC 9000 and a smaller CMC 250, replacing a pair of older machines.

The 9000 went into its First 4 Print Finishing lite in Blackburn to run alongside an existing CMC 400 and a CMC 250, while the new CMC 250 went into the First 4 Direct Mail site in Preston, to run alongside a pair of existing Buhrs envelope lines plus a new Riso ComColor GD 9630 cut-sheet printer that was installed the previous summer.

Always a Lancashire company, First 4 Print Finishing (F4PF) opened its doors in Blackburn in 2003 with just one folder, one stitcher and one guillotine. In the 25 years since it has seen numerous expansions, equipment upgrades and installations. It extended from its original fold, stitch and trim offering by adding extra services to appeal to the direct mail market, including high-speed mailing lines, die-cutting, inline inserting, and enclosing. Today it claims to be the UK’s largest independent bindery alongside its enclosing and now substantial polywrapping facilities.

The company saw a significant size boost in 2016 with the acquisition of Vitesse Mailing Preston. This added 50 staff and a 2,800m² factory. Around the same time the group purchased its existing 4,650m² factory in Blackburn, where about 100 staff are employed.

Research among customers, suppliers and its own staff suggested that a single brand name would work best, so Vitesse was renamed First 4 Direct Mail and the companies were organised into a group structure (called First 4 Group). All the existing direct mailing kit was moved from Blackburn to Preston to concentrate all DM activity on one site, and a fourth polywrapper was added to handle the capacity.

Today the group has the capacity to process 10 million promotional items per day and turns over getting on for £5m. Customers are a mix of mainstream retailers, charities and trade work from direct mail printers.

Managing director David Nestor has also appeared in PrintWeek’s Power 100 for the past four years, climbing up the ratings to reach number 65 in the most recent 2017 listing.

He explains how the two sites operate. “We operate with a very clear division of work mix,” he says. “F4PF produces the vast majority of our door drop and media insert work, which nowadays exceeds over 30 million packs per month. Our F4DM direct mail division handles most of our DM traffic, where we specialise in smaller, more targeted campaigns that mail in both paper and polywrap. The group works for both trade and direct clients in equal measure. We operate in quite a unique space where our finishing division produces the majority of the pack fill we output at both sites, something most other DM providers are unable to offer.”

The group is entirely dedicated to mail finishing services, despite the adoption of the Riso long-A3 inkjet, which replaced four mono HP laser printers. The Riso GD 9630 was its first full-colour printer, offering CMYK plus grey inks. Running 160 A4 ppm, this was claimed to be the world’s fastest cut-sheet single-engine printer at the time, though Riso has since introduced the even faster twin-engine T2 for 320ppm. “We don’t actually print in the traditional sense,” says Nestor. “The Riso inkjet press handles small and medium full-colour inkjet personalisation projects for our DM clients, often removing the requirement for litho base stationery. It enables us to offer and handle full colour variable data campaigns.”

Why choose the CMC kit?

“We moved to CMC around four years ago, from traditionally operating Buhrs technology,” Nestor says. “We experienced far greater efficiencies and versatility. We now operate four lines across the majority of CMC’s product range.” As the CMCs had already proved themselves, the company didn’t look anywhere else when it needed to move up a step in speed.

“The new 9000 is an ultra-high-speed line, perfectly suited to handle our monthly commitment of door drop and media insert packs,” Nestor explains. These are not personalised inside and don’t need personalised addressing, so they are non-windowed pre-print envelopes.

“We regularly run one or two-item fill campaigns at 20,000 packs per hour dependant on format and configuration,” Nestor says. “With up to 35 million items per month, we need the 9000. We have a job starting tomorrow that’s in the double-digit millions.”

The other lines at Blackburn are likewise mainly used for door drop work. “The 250 and 400 lines tend to output circa 12,000 packs per hour, Nestor says. “Our 250 in Preston also has inline inkjet capabilities. The 250 is a very good direct mail workhouse, but slower than the 9000. However it’s still in the upper reaches of throughput and is quick by a lot of people’s standards.”

The CMC 250’s maximum production speed is 16,000 envelopers per hour (for DL, or C6 and C5), or 12,000 per hour (for C4). The inkjet on the Preston 250 is made by Domino and is used for addressing non-window envelopes. There are Domino inkjets on the four polywrap lines too.

Later this year or early next, Nestor plans to add a camera system to the Preston CMC 250, so it can process data integrity for personalised inserts with matching address printing. So far any personalised mailings have to use window envelopes.

The CMC 9000 envelope inserter is a very fast line, with six rotary feeders and a maximum production speed up to 30,000 inserted and sealed DL envelopes per hour. It manages this by pre-staging the envelope to be inserted. A single continuous motion inserts collated documents into the envelope and then drives the envelope to the output. Insert and envelope feeders are located on the operator side over the main collation track, making them easily accessible for loading.

Also maintaining high throughput is the ‘no-stop’ system that automatically rejects errors, and flip-flop system management (which allows the same product to be loaded in multiple feeders).

There are options for PC remote control of multiple lines and for camera based data integrity checking, but First 4 Print Finishing doesn’t need those.

“CMC UK handled the installation in the course of about a week, encompassing installation and training,” Nestor says. “The machine has completed everything we have asked of it and more especially in terms of output. Service and engineer deployment has always been excellent, with little downtime.”

Any small niggles? Nestor says that the high speed comes at some cost: “I think it’s fair to say the other machines in our portfolio handle some of our more demanding pack formats better,” Nestor concedes, “especially if the pack contains something out of the ordinary like coasters, bookmarks, keyrings, etc.”

Now the company has run the CMC 9000 around the block a few times, would he recommend it to others? “Absolutely, if a business outputs significant monthly pack volumes the 9000 is an ideal investment.”

The First 4 Group started in 2003 as First 4 Printing Finishing in Blackburn, growing to employ 100 people with a turnover of about £3m in 2016. The acquisition of Vitesse Mailing Preston added 50 more staff and another £1.5m in turnover. After renaming Vitesse First 4 Direct Mail, the companies were reorganised to operate as a group with individual specialities, and all of the Blackburn Direct Mail kit was moved to Preston.

The company is run by managing director David Nestor.

First 4 Print Finishing runs an extensive range of finishing machinery in Blackburn, including folders, stitchers, guillotines, envelope enclosers and polywrappers. Apart from normal finishing, a miniature finishing service for the likes of cosmetics and pharmaceuticals instruction sheets is offered via an H&H KL112 8/4 folder.

The new six-station CMC 9000 is running in Preston, alongside a CMC 400 with four stations and two CMC 250s, one with four and the other with six stations. There’s also a pair of older Buhrs BB600 six-station enclosers.

Despite the high speed automation, some hand finishing is still needed for unusual work, so 20 staff are dedicated to work that can’t be mechanised.

Why it was bought…

First 4 wanted to improve efficiency and versatility of its inserting lines. The CMC machines looked to be a perfect fit.

How it has performed…

The CMC 9000 is a very fast machine, which has been one of its key benefits. That speed, however, means it sometimes has trouble managing “more demanding pack formats”, according to Nestor.