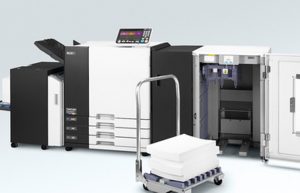 The direct mail subsidiary of First 4 Print Finishing first spotted the machine at PrintWeekLive! in March, where it was given its first UK showing. First 4 group financial director Lorenzo Fardella visited the show along with group managing director David Nestor.

Nestor signed for the machine at the show and it came into F4DM’s Preston premises at the end of last month. The firm’s four HP 9000 mono laser printers retained as backup.

“We were in the market to look at diversifying our printing capabilities at Preston and were looking at traditional black laser but that was a bit limited in what it can or can’t do,” said Fardella.

“The Riso seemed to tick a lot of our boxes. It gives us higher run capacity, the speed we require and also the flexibility, and that is something that is really important when you buy these machines.”

The ComColor, which was first shown at Drupa 2016, is billed by Riso as the world’s fastest cut-sheet printer. It uses Forcejet single-pass inkjet technology with a five-colour (CMYK plus grey) ink set. It also uses an EFI Fiery digital front-end, printing at 600dpi resolution on paper sized 340x550mm maximum.

Fardella added: “The way the market is going it’s more data driven now, more customer focused. Runs have got shorter and have just got a little more complicated in what they are trying to achieve. To do that you need the right kit.

“It’s a growing part of our industry, tags on very nicely to the traditional trade finishing arm and it does allow us to cross sell from both sites.”

45-staff F4DM makes up around one third of First 4’s overall staff numbers and around 20% to 30% of its £5m sales. Aside from the Riso and HPs, it runs four polybaggers, six paper enclosers and pharmaceutical folders.